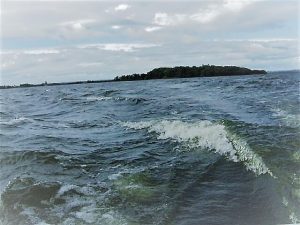 Sometimes the light plays tricks with your eyes and not only that, but coupled with the movement of water, often what you think you see simply isn’t there. Alone in the stillness and expanse of blue with nothing to disturb the tranquillity except the constant lapping of water against the boat sides or a distant cry from a bird in flight, I sit.
Silence…. Dream and reality intermingle.
Usually I’m not alone in this surreal and watery world but today I am. No distraction with the occasional murmuring of my fellow boatman with talk of the weather or that strange cloud formation gathering and what it might bring our way. For sixty years I’ve come to know well this place that is Lough Neagh, a place that has stories to tell from it’s depths that it will never yield, both ancient and new.
Today, I sit a while longer than I usually do, absorbing the peace, but now I notice the light is beginning to fade so I make ready to return homeward, but not before my gaze scans the canvas before me one last time.
Something fleetingly catches my eye – a slight, but unusual shadow on the distant waterline that compels me to strain my age-weary eyes….. that draws me to look again. Just as suddenly , it’s gone… it’s just the water revealing deepening shadows as the sun makes her descent. I start up my engine but – something stops me from turning my boat away. Yes, there it is again, a darkness, a shadow…and then it’s gone. A shiver runs down my spine as the evening air suddenly cools. I need to make a decision for soon it will be too dark to see anything, if indeed anything is there to see. I’m already moving in the direction of that shadow, perhaps against my better judgement, further away from home. As I get closer, my eyes pick out a long, low shape rolling with each wave. I’m still a good distance away but now
I know I’ve made the right decision. Cutting my engine off and drawing closer, I see an upturned canoe with two men clinging to it. I call out but get no response. After a moment I’m relieved to see a slight movement of the head from one – exhausted, in shock, but alive! I don’t know how long they have been in the cold water but they and their canoe have become one, as their hands have gripped their lifeline like a vice. These men are in their prime so with difficulty I am able to haul the first one over the side into my boat. The second is more difficult as he won’t…can’t…release his hold on the canoe. I prise open his fingers and with a great deal of effort haul him over the side into safety. Alive but exhausted we head for land in the half darkness, my heart a mixture of both joy and sorrow – joy for the lives that would continue after their ordeal and sorrow for the memory of one close to my heart that never did.
This isn’t my first encounter and it won’t be my last.

It would be difficult to imagine any body of water as unique as the Calliagh Berra’s Lough. Its uniqueness stems from the fact that it’s a lake on the summit of a mountain – Slieve Gullion – the highest point in Co Armagh at almost six hundred metres. This fascinating mountain is at the centre

Several years ago as a Belfast medical student I spent an Erasmus term in Galway. Such a vivacious & welcoming place with many new friends made. Now I’m working as a junior doctor in the middle of the Covid pandemic. Such a difference from my carefree student days, this bewildering and angst laden time, everyone

I prayed that the Lord would keep my children safe as I lay in the ambulance. Soon I would leave the green fields of North County Dublin behind, to enter the suburbs of the spreading city. What would await me there and why was I feeling so ill? I stared apprehensively through the window, as