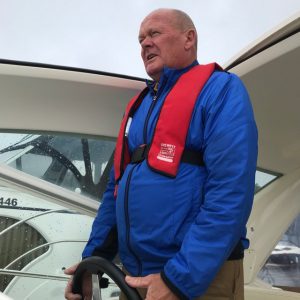 “Okay Michael, let’s go” said my father picking up an old hessian sack and heading out the
back door. I followed. We were heading to the Bunduff rocks, on the edge of the Atlantic
ocean, near Mullaghmore in North Sligo. We were heading to do some fishing for Ballan.
Conditions were ideal, dull but not raining. My father had dug up blackhead worms, a
favourite of the Ballan. He now had a jam jar full of them to use as bait.
We walked across the fields, heading towards the sea. When we reached what was called
“The Headline” field, we stopped and looked across Donegal Bay. The Slieve League
mountains rose majestically from the ocean. They are home to some of the tallest sea cliffs
in Ireland. Three times the height of the Cliffs of Moher. The left hand side of the
mountains, as we looked at them, tapered down to the sea and left the wide Atlantic Ocean
free of land all the way to Canada. Except not today. As I looked at the ocean, I thought I
saw an island off to the left of the mountains. “Dad” I said, “what island is that?”. “That,
Michael, is Hy Brasil”, dad began. “ It is the mythical island of the Atlantic. It appears every
seven years” I looked closely at the shape. It had a mountain in the middle, shaped like a
volcano, and some high ground on the right hand side. I was fascinated with this vision.
“We are lucky to see it” said dad. “because it will shortly disappear again. Come along, lets
head for the rocks” We headed across the fields again.
After twenty minutes or so we arrived at the sea. “Perfect timing” said my father, “the tide is
just turning” This was good because the Ballan would come in with the tide. They loved to
feed on the shellfish that were attached to the rocks.
We found a place where there was a good depth of water, even at low tide, and proceeded to
prepare our fishing tackle. It was simple gear, a hank of orange nylon line, weighed down
with a piece of lead my father had removed from a wet battery. About a foot above the
weight was tied a piece of clear gut that led to a silver fishhook. On to this hook, we threaded
the blackhead worm. “Hope the Ballan are hungry today” said my father as he dropped the
line into the water just under where he stood on the rock. I got my tackle readied and also
dropped the line into the water. I didn’t have to wait long until I got a frenzied chucking. “I
have one “ I declared. I began to pull in the line. “Keep it out from the rock, or the Ballan
will go under it” my father advised.. I did as I was told and after a few seconds, I could see
the shiny back with raised fins break the surface of the water. The Ballan Wrasse is an
unusual fish, in that every one born, is born a female When they get bigger, the stronger ones
turn into males.. This was a male, big lips and quite large. “That’s tonight’s dinner, mums
chowder” I proclaimed as I landed the fish on to the rocks. We fished for another half an
hour and caught two more Ballan. We then gathered up our gear and headed home. I took a
look to where I thought I had seen “Hy-Brasil” that morning, but it was no longer there. I
never did see it again.