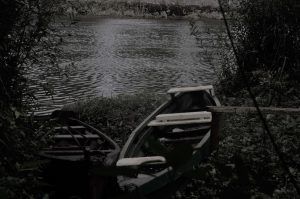 The River Suir cutting through the Golden Vale leaving the majestic Sliabh naMban in its wake flows
into my hometown of Carrick-on-Suir with a mysterious composure.
This stately flow masks a turbulent force, evokes perpetuity and a seeming indifference to the
generations that have traversed its banks, lived, loved, and died in the market town that sprang
beyond the river’s boglands.
St. Nicholas’ Church bell tower stands beyond the river as another reminder of history and mock
permanence, but it cannot compete with the ancient Sister river’s emergence in the mists of time.
Currachs, some resplendent of craft while others worse for wear, rock gently on its surface awaiting
untying. As the river tumbles over the Friar’s Rock, a solitary fisherman’s casting fashions perfect
loops in the clear air.
My most harrowing memory of this waterway has inscribed a signature on my mind that time will
not erase.
At the Ormond Bridge one grey mid-Winter a diver retrieved the bodies of three children and their
mother. We watched in utter shock as the river’s waters spilled from their catatonic doll-like
expressions as they were handed over one by one to the bank side. A fourth sibling was swept
further downstream only to succumb to the winter flood.
The river’s capacity to suffocate so many lives without so much as a pause wrenched us to our very
souls.
That Old Bridge stands fast, erected before Christopher Columbus raised a sail while the river flows
onward past stark quayside buildings, ghostly remnants of one-time thriving commerce and craft.
Under the Dillon Bridge, a relic to modernity connecting the two parishes of Carrick, the Suir flows
past the former resting place of a sand barge and the Knocknagow, river crafts that travelled this
channel for decades, when into view comes the Ormond Castle.
Seat of the Butler Family almost a millennium since, the Suir was the main artery for friend and foe
alike.
What echoes of time gone by does this river cradle?
Certainly, there lies on its bed ghosts that we cannot conceive, sentenced there perchance before
human endeavour settled riverside.
2
In mine and my ancestors’ time the Suir has witnessed profound change while playing the innocent
bystander to the unyielding collaboration of man with Earth.
Trade patterns and the trappings of commerce come and go.
The Suir’s watercourse is a repository of the cries from the wonderful sporting feats and crowded
athletic contests that Carrick has enjoyed.
The Suir’s mirror-like surface has refracted many the countenance of great Carrick sportspersons as
they dream their sporting dreams often departing Suirside to flourish far afield.
Musicians and artists have parlayed on its banks while vibrant theatres house thespians who hone
their craft just yards from the river’s edge. Some have been catapulted onto an international stage
released from the clutches of the Suir.
The Suir has flirted with this tapestry of life yet moves nonchalantly through our town, seemingly
blind to the trials and tribulations, the ecstasies, and agonies by its sides.
I cannot reconcile its grandeur with its indifference.
The river Suir’s destiny beckons as it leaves the provincial town of Carrick and winds and stretches by
Leinster’s western edge on into its Viking quarter.
From there it travels to join its Sisters bathed in a liquid gold at Cuan na Gréine to dissolve into the
Atlantic Ocean and shed its folklore and legend, kith, and kin.
To be born again in the labyrinths of Tipperary hills and begin its expedition once more:
A mission to drown the wayfarer.

A man once told me he saw a space craft hovering over Marlfield Lake outside Clonmel. This is a true story as told to me and I believe he believes it. I wasn’t there. It was a nice fresh morning in the late 1990’s, the sort day where you know will it be warm when

A young boy, to the ducks, threw some bread. “Not so close!” his parents berated. But too hard did he throw, Went head over toe, And sulked his way home, saturated.

Water is a liquid formed when two gases come together to form H O. The whole world would starve as nothing would grow without it. Everything would be barren like the Sahara Desert. Let us think of where water has done a lot of good and made the world a very beauitful place. My mind

Oh how the memories come lfooding back of my childhood, the wonderful itmes we had in Graces bog, 6 acres of magic at the back of my own home. Every season had something different to offer in this oasis of beauty. Oh how I remember the morning mist as it rose over this wonderful place