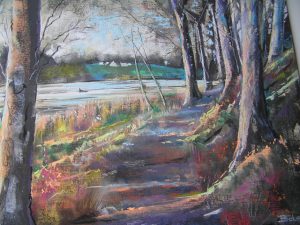 A life changing “Body of water” experience that influenced our family over 40 years ago, was brought about by a sight so startling that it became one of those “never to be forgotten, moment.”

We, that is, Mum and Dad, and our four children, aged 11, 9, 7 and 5, were on a tightly budgeted educational Easter break in Paris.

Having reached the heights of the Eiffel Tower, glided down the Seine, visited the Louvre and ridden on a carrousel of horses that lunged to the strains of “ Under the Bridges of Paris with Me,’ we, decided to travel to Versailles to experience the opulence and explore the gardens.

This is where it happened!

In a long rectangular pond, edged with white marble, our son spotted activity on the bottom of the shallow, water. Excitedly he called us all to look. The entire bottom of the pond was seething with heaving bodies of undulating frogs.
Small, persistent, uninhibited toads chased the larger females in testosterone driven molestations.

“What are they doing Daddy?” said the youngest with wide innocent eyes.
The cacophony of croaking toads and the sight of the exhausted females initiated a barrage of questions that we had not bargained for on this cultural outing.
The “birds and the bees” we might have handled, but the sheer unadulterated lust of the frogs was something we had not anticipated.

On returning home, the frogs were the main topic of conversation, heightened by the fact that we had, on our trip, encountered, and eaten with relish, a bowl of crispy frogs legs, which Dad enthusiastically identified as chicken to avoid any conflict of interest or decisions not to eat them, as a matter of principal, especially as they had already been paid for!

So began a lifelong interest in observing pond life.

The following February a large semi-circular hole was excavated, in our garden, concrete poured, and sealed with sky blue chlorinated rubber paint, and finally filled with water and used as a swimming pool for the remainder of the summer.

We now had our very own “Body of Water.”

By Autumn, the sky blue bottom became green and we gradually introduced river weeds, river snails, oarsmen and beetles to take up residence. Wild Lilies and Iris flags grew in the shallows.

At last we were ready to invest in two Koi Carp and we were truly hooked.
They were christened Ruth and Jerry and they ate from our hands, slurping bubbles and tickling toes.
Every Birthday and anniversary we added a namesake and they went forth and multiplied. Goldfish, Veil tails and Moors (the latter aptly named Christy, Thomas and “the Merrier”)
Then Spring arrived and we “borrowed” a small clump of spawn, from an evaporating river rock pool. (it was isolated, or you could say, cocooned, in an old fish tank, that floated, to preserve the tadpoles survival. (Just in case the bigger fish thought it was caviar!)

Finally four years later, we were treated to the most amazing orchestral, spectacle as neighbourhood frogs gathered to celebrate the start of their latest festival that would have rivalled “Woodstock.” for mud, noise and promiscuity.

Over the past 40 years we have enjoyed and grieved for a Sturgeon, called Jaws, who constantly patrolled the edges and grew to 18 inches before being unceremoniously swiped by a drooling cat.
We have invested in a fine net, as not one but two Herons were spotted casing the joint and you can bet, they were not fishing for compliments.
A bee –line from the hive to a weedy platform ensures well -hydrated colony and a great crop of honey and so we live and learn.