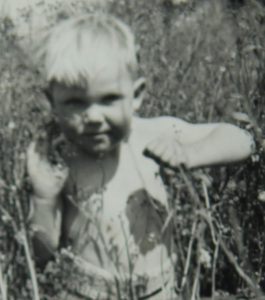 My granny and grandad lived in an old farmhouse near the Camac river at Bluebell, which was still fields in the 1960s. The house was beside the old, single carriageway Naas Rd and the Camac ran just beyond the end of the garden, behind a row of mature Beech trees. There were cattle in the fields and there was a ford near the house, where the cattle would go for a drink, and could cross into the opposite field. When we visited in the school summer holidays, my older brother Ronnie and I used to go down to the ford, where we would catch tadpoles and pinkeens in the river, and sometimes waded upstream, where the squidgy mud was thick, up to our ankles.

The house had a big rain barrel which was filled from the house gutters, and we used to put the tadpoles & pinkeens in the barrel. It was a metal barrel with ridges on the sides, and was too high for me to see into. I was maybe 6 years old. So I pulled myself up and used one of the ridges to give my feet a grip so I could look into the barrel and see the tadpoles and pinkeens. But when I leaned forward my feet lost their grip and I tumbled head-first into the barrel. Ronnie ran into the house to raise the alarm and my father rushed out, grabbed my feet and lifted me out of the barrel. I didn’t appreciate the fact that my Da had just saved me from drowning, I just knew that I didn’t like being dangled by my feet, dripping wet. “PUT ME DOWN !” I shouted. My father was so relieved to find that I was in good health that he just laughed, but I was not amused. To this day I am still not confident in water, although I learned to swim over 50 years ago.

The house was in a poor state, as my grandparents were on a low rent which couldn’t be increased, and the landlord wouldn’t mend the leaking roof. Some years later they were rehoused in a Clondalkin council house on the Watery Lane. The old house was flattened, the fields concreted over, and the river was buried in a big concrete pipe. This is, to my mind, an act of unspeakable vandalism – that developers can be allowed to do that to a living thing like a river, killing fish, plants, riverside trees and bushes, removing a habitat for many creatures and taking away a priceless public amenity. Bricks and mortar often don’t last even a hundred years, but a river has run its course for thousands of years, and a tree, left to its own devices, will outlive a castle.

Once upon a itme there was a river. It was called the Liffey, or An Life, or Anna Livia Plurabelle. They say that the Barrow, the Nore and the Suir are three sisters. The inteniton is poeitcal, misguidedly. Siblings don’t speak delicately to each other, they argue. Rivers don’t babble or sing, they run. They

The Person: My dad, John Sheridan aged 15 The Place: Dublin Coast It was the summer of 1946; the beginning of July and it was hot. I can only remember hot summer days in my childhood, I don’t believe it ever rained when we were on the school holidays. Now, this was a very important

My earliest memories of going fishing date back to the very early 1960’s. I grew up in Killester, a suburb of Dublin. The venue of my first expeditions, (three small ponds located in the grounds of Clontarf Golf Club), required me surreptitiously climbing over the wall near my home late in the evenings, when Golfers

Once upon a time there was a river. It was called the Liffey, or An Life, or Anna Livia Plurabelle. They say that the Barrow, the Nore and the Suir are three sisters. The intention is poetical, misguidedly. Siblings don’t speak delicately to each other, they argue. Rivers don’t babble or sing, they run. They