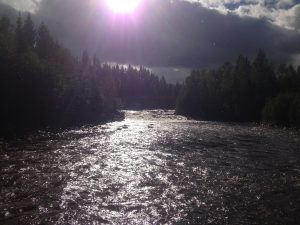 The monk and Pangur Bán, his cat, slept soundly on a wild, wet, wintry night in 1010. The
North Sea was rough, the Scandinavian rivers were still frozen so the Viking longboats could
not sail. I would like to fly SAS to Sweden, over the North Sea oilrigs, but Lockdown only
allows travel of 5 Km with a valid reason. Pangur Bán can dream but so can I. Sometimes
dreams actually come true…
It is the 18th May 2010. The ice on the Älv river is Southern Lapland is completely
melted. The giant Baltic Salmon (salmo salar) will soon begin the journey to their spawning
grounds. The Älv is 120 Km long. It rises near the mountains which divide Norway and
Sweden. Unlike most Swedish rivers, it is still in its natural state, no hydroelectric dams to
impede the salmon’s migration. It enters the sea in the Gulf of Bothnia which is the northern
section of the Baltic.
The Sami, the name which the Laplanders like to be called, have been using the river as
a means of travel for thousands of years. I have seen carvings on rocks depicting travel and
hunting by canoe. Sapmi, another name for Sami, are considered an ethnic group that
populate Northern Sweden, Norway, Finland and Russia. They have their own Parliament
and language. They dress like you and I and travel by quadbike in summer and snowmobile
in winter to herd the reindeer. Young Laplanders like to migrate to Stockholm where all the
“action” is!
There are Blueways and Greenways in Ireland. In Sweden there are sleden: river
walking trails. They are not paved, they are well signposted and generally wind their way
through the shade of the forests. Bridges are made of wood and sometimes a wooden pathway
takes you over a boggy area. There are also little cabins interspersed along the trail where you
can cook and sleep at no cost. Nothing is vandalised, nothing is stolen-that’s the way on the
Älv riverbank.

Anders is not a Sami but a local swede who taught me about the flora and fauna of
the Älv. The fish which inhabit the river include salmon, seatrout, brown trout, grayling, pike,
perch, lamprey and white fish. Swedes consider perch a delicacy. The Swedish for salmon is
Lax and seatrout is lax-oring. Leixlip (Léim an Bradáin) got its name from the Vikings. The
riverside is bordered by natural conifers and deciduous forests. The light breaks through the
canopy which allows growth at all levels. The sitka spruce takes 70 years to grow but it is of
a much higher grade than Irish timber. Silver birch is the most common deciduous tree. There
are lingon berries, blue berries and cloud berries in season, as well as many types of edible
mushrooms. Anders makes lingon berry wine and jam from the fruits of the forest.
Since there is so much food, birdlife is abundant. There are capercallie, blackgrouse,
gooseanders and hazel hens. I have seen a silver birch of 40cm in diameter felled by a beaver.
The moose or elk are a problem for Sveaskog, the Irish equivalent of Coillte. Roe deer and
red deer inhabit the forests close to farmland. Farmers don’t sow corn until June as the area is
not too far from the Arctic Circle. However, Mother Nature makes up with 24 hours of
daylight!
In my dream I can hear the sound of the wild forsen (rapids). I can hear the water
tumbling over the Vattenfall (waterfall). The Älv will flow on to 2021 and hopefully SAS
will fly?

A man once told me he saw a space craft hovering over Marlfield Lake outside Clonmel. This is a true story as told to me and I believe he believes it. I wasn’t there. It was a nice fresh morning in the late 1990’s, the sort day where you know will it be warm when

A young boy, to the ducks, threw some bread. “Not so close!” his parents berated. But too hard did he throw, Went head over toe, And sulked his way home, saturated.

Water is a liquid formed when two gases come together to form H O. The whole world would starve as nothing would grow without it. Everything would be barren like the Sahara Desert. Let us think of where water has done a lot of good and made the world a very beauitful place. My mind

Oh how the memories come lfooding back of my childhood, the wonderful itmes we had in Graces bog, 6 acres of magic at the back of my own home. Every season had something different to offer in this oasis of beauty. Oh how I remember the morning mist as it rose over this wonderful place