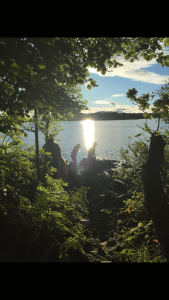 How Vin lost his fin … Well, where do I begin? This story starts in a tangle of nets Vin’s memories are of being trapped and distressed Squeezing himself, so desperate, so tight His little heart beating wildly with fright With heroic strength and the will to survive He forced himself through that net to

The only thing I remember about my school days was the day I went mitching with my brother Vincent. Somewhere between our house and Boyhan’s Forge we decided we would go mitching for the day. Heavens only knows what put the thought in our heads: perhaps I didn’t have my homework done and knew I

We are a small fishing club on a stream in Westmeath, Ireland. We are hopelessly biased, but consider it the finest angling water in the entire fairy kingdom. For hundreds of years membership did not change – it was a case of waiting for ‘dead fairies’ slippers’. During that time we enjoyed our sport in

I often wonder how today’s kids enjoy themselves. I mean really have fun. In an age where every mystery is quickly explained is there a need for Nancy Drew or Enid Blyton? Do they wake every Saturday morning with the same plans and exuberant energy that we had when we were kids? Will they ever