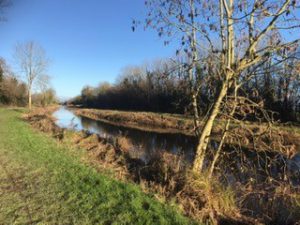 Once upon a time, the Mountmellick branch of the Grand Canal was
a hive of activity, channelling brimming barges and their solid equine
companions from Monasterevin, Athy and beyond. Today, the
amputated waterway bustles with other colourful creatures.
Stretches of it echo Kavanagh’s “leafy with love”, while elsewhere
cold cement roadways have ceased its life altogether.
Luckily for Jim McCavet, he resided in the former. Jim’s lush green
pasture hosted his fine flock of Friesians, at the bottom of his little
known lane, along the Grand Canal. A chorus of avian chatter woke
him in the morning, occasional croaking frogs accompanied his
evenings. Dappled skies shaded Jim’s modest cottage, where he
lived contentedly…..until the discovery was made.
Cursing colourfully, he rubbed his eyes to make sure. But it was true,
some conniving, thieving… unmentionable had unhitched his
treasured trailer, from his 14 year Ford pick up. Cursing again, Jim
ruefully shook his head. Dewy footprints signalled where the
opportunists had wheeled his Ivor Williams ( with only a single
scratch) into the night. The melodious tune of the dawn chorus
struggled to be heard.
Word quickly spread to the Lennons and the McNamaras, the
neighbouring farmers. Sympathy and indignation clouded the air.
Farming was tough, margins were thin, sure if they won the lotto,
they’d stay farming till it was all gone! Mick McNamara, a troubled
look on his antique face, dialled Joe Lennon’s number. They shared a
fondness for the mainly mild mannered bachelor. A plan was
hatched.
Not wanting to raise Jim’s hopes, the pair departed quietly for the
Sunday Market, a place where merchandise of questionable origin
was often traded. Mick’s ten year old Cruiser, belched into action
and pointed its way south. Joe’s ample frame folded in beside him
and their quest began.
Midday, warm sun smiling from a blue sky, the pair spotted the
carnival colour of their destination. Parked and paid, eyes peeled,
they set out. Their ruddy complexions and rotund frames didn’t quite
cut Miami Vice, but these two boys were determined not to miss a
trick. Banter was flowing, schemes were being hatched, some
suspicious bargains filtered through air. In their matching flat caps,
fetching check shirts and midriff belted denims, the two blended
seamlessly into the crowd.
Simultaneously they spotted it, Jim’s pristine double axle Ivor
Williams trailer for an unbelievable €1,500 euro. Tactics had been
considered on the morning journey. They gave each other ‘the nod’.
Beside the trailer, two slick haired, scrawny teens, lounged
disinterestedly.
Jim spoke, “The trailer lads… where did ye acquire it?”. A flicker of
fear, was followed by a bravado response, “We’re traders, bought it
on Donedeal, all legit!”.
“We’re not convinced, looks woefully familiar to us”, said Mick,
drawing himself to his full five foot ten, stepping in closer than
necessary to the slicker, scrawnier of the two.
In an instant, the two ‘salesmen’ turned on one another,
“I told ye!”,
“It was your bloody idea!”
“You wouldn’t listen, I told ye!”.
And so they continued, fists were thrown, a milieu ensued, and Mick
and Joe quietly, wheeled away the trailer, hitched it to the back of
the Cruiser and smiling sweetly made their way back from the din.
Jim was chopping logs, when the happy pair wheeled in, unable to
hide their glee. Mick eased the Cruiser to a halt beside a sweaty Jim.
“Well!”
An astonished Jim straightened, and almost speechless circled the
the trailer, scratching his head. “Gosh lads, I don’t know what to
say…..” said the dumbfounded Jim.
“Thanks maybe?”
“Thanks…..but it’s not my trailer !”

Well was when my story really began. Following directions, I found the well, and filled my bucket. As I made my way back, I met a neighbouring young man whom I had known previously as a lankly shy bashful young fellow who always carried a hurley while he was romance It was the Summer of

The stress had built up in me to the point where I felt I was going to explode. I could no longer cope. Grief, sorrow, anger, self-pity all swirled around my confused, tired brain. Mum was so ill, I knew she was dying, it could be days, it could be weeks, it might even be

I grew up not more than a hundred feet from the Conoboro Bridge, which spanned the River Erkina. My life is dotted with memories of the river, a river whose banks I’ve walked hundreds of times, a river whose trout I’ve caught for competitions and sport, a river with its own history and each individual

“Here! Hand me that pump, Har, and I’ll have these cans filled in no time at all”, said John. Looking up, Har counted five more neighbours with their tractors and trailers, behind John waiting in line to use his water pump by the Timogue River. Irritable as hell, he handed it over, saying ‘·Are ye