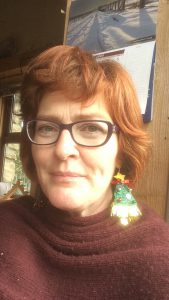 My latest ploy to help recapture the svelte figure of my teenage youth is to scale the steep hill leading to Knoackalongy mountain daily with the two dogs. I clamour over the stone wall surmounted by barbed wire and then, loose on spongy mountain bog, we roam for hours.
That’s the theory, now.
The practise?
Hmmmn!
…I usually tear the crotch out of my jeans on the barbed wire at the edge of Martin’s field and then walk slowly – usually gasping – through the squelching vegetation to a boulder overlooking Lough Achree. I sit, bedraggled and mid-life banjaxed, watching the skim of the heron as he water-skis in to land. The dogs – Arthur a big Heinz 57 bruiser and Sally, an ADHD spaniel – yip, yap, zip and zap in the wetlands, hoping to raise a bird, a rabbit, ANYTHING, from the marshy garland of growth that bracelets the lake.
This is the youngest lake in Ireland, reputedly created by an earthquake in 1490.
Legend has it that an entire village is submerged by these chilly waters and that more than 100 villagers perished at the time of the earthquake. I’d believe anything of it. The surface is metallic, secretive. The sun never gets to it. If it has a heart, it is cold. Yet I love the mystery of these waters. I want to believe that there is sun beneath that gunmetal grey surface, that there is laughter and the burble of life in a sub Aquatic Sligo village…a local Tir na N’Og. I imagine Niamh on an enchanted white horse rising out of the depths and charging off like the wheels of hell towards Queen Meabh over on Knocknarea. No reason why one mythical dame in Irish legend might not fly across the landscape to another, seeking a neighbourly bowl of sugar.
I often prefer to sit in my grandstand seat- a boulder further up Knockalongy mountain – where I can see the dogs pronking through the lakeside fronds. They fantasise about the biggest living rabbit coming within the span of their paws. That’s what I love about dogs – every day is their best day EVER. Every day is the day they will catch super-rabbit.
The gulls chortle mockingly overhead. Sheep bleat plaintively. Meanwhile I imagine humans from different eras wafting alongside me as they carry on with their ethereal mountainy lives. I slide my mind’s doors open to other dimensions, other realities. I listen to the tweedle of the lapwings and plovers, I watch the insolent superiority of the heron as he cruises in to land.
Occasionally a buzzard stalls way over my head, screeching and sounding off about his intention to protect his family from riff raff like us. He is new to the area, only having made a Sligo comeback in the past 15 years. He’s a bit heavy with verbal warnings.
Lighten up, buzzard! If Arthur and Sally can’t catch a lapwing or a bunny, they don’t represent much threat to you.
Nor do I, with my gamey knees.
The dogs, when out-rabbited and out-birded, tremble in heaving messes of pungent wet fur beside me on the boulder. Their coats reek of mud dragged out of Lough Achree. We all twitch our ears, watch, absorb, imagine, shiver. Everything and anything is mirrored in the water here. Yet for something so still, it has its own society pulsating around it. We are just part of a rather big lakeside-life crowd. Our hearts thump with the raw ecstasy of it. We will come again tomorrow. It will be new again. It always is. Always.