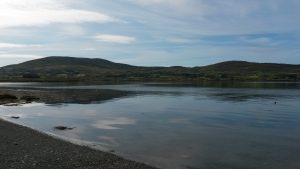 At the water’s edge
Grains of wave-washed sand
Years of my childhood.
Today as a storm force ten wind whipped the normally tranquil harbour into a white fury, I walked the shoreline. As I listened to the gentle scrunch of rough sand under my feet and watched the unleashed waves hurl themselves at the unshaken rocks, I walked, in memory, the calm shorelines of my childhood.
I remembered long, slow holidays in The Old Head Of Kinsale, holidays when days seemed to merge together until we felt that we lived outside time and that we would never again have to face the realities of school and homework. Youth was our world: we thought we were the first to discover it and we could never envisage being anywhere else. The rich and golden sands sparkled in the sun on the twin strands of Garrylucas and Garretstown. When did we begin to call them beaches? The word strand is so much more open and free. Garrylucas was our favourite and it is still beautiful although its lustre seems to have faded over the years. Or has the fading been simply in my mind? There we played football and cricket; we ran races and held long jump competitions. We swam for hours, always insisting that the water was “lovely” and “really warm”, as we shivered our way back into tee shirts and shorts, and, all too often, woolly jumpers.
There too, we picnicked, yes, we picnicked, as a fresh South-Westerly wind whirled around us, swirling grains of sand into our eyes and our sandwiches. The sandwiches – what an apt name!- always tasted wonderful, flavoured by the sand, the wind and the salty sea. We crunched the sandwiches and slurped down mouthfuls of Tanora.
After the picnic the patient mothers would return to their Foxford rugs to “sunbathe”. The mothers showed tremendous dedication as they soaked up the few sparse rays of sun that fell in their directions. The children, fed and watered, then became hunter-gatherers among the rock pools.
I walked Garrylucas strand in all weathers, searching for flotsam or jetsam: I was not fussy about which. I never found anything of any great interest or value but I continued to hope.
Along the strand on Friday mornings we would sell the mackerel we had caught the previous evening. The Catholic Church’s rule regarding abstinence from meat on Fridays was a godsend for us as it ensured a ready and eager market. The profits were usually enough for us to replace lost fishing tackle and splash out on a few bars of chocolate and an illicit packet of cigarettes.
As we grew older, we grew more daring. When we reached the age of about twelve we would occasionally sneak from our beds at about 4.30 A.M. and walk quietly along the road to Garrylucas. There, at that early hour, we would re-enact the events of a normal day. Seven or eight young lads would meet, swim, run along the strand and eat a picnic. We would savour the early morning chill of the salt water on our skin. We would watch the sunrise bring its message of hope and renewal to a reawakening world. Then we would return quietly and contentedly to our beds, to sleep until lunchtime to the bewilderment – real or feigned, I’m still not quite sure – of our parents.
Not long after the summer of the early morning picnics we began to notice girls, and soon everything changed. But that’s a story for another day.

The year must have been about 1954 or 55. We had spent the day at the seaside – Summercove, outside Kinsale. It was a fairly typical family outing: mother, father, grandmother and two small boys, the younger a baby. I was the elder, about four years old. The day had passed in the usual way

Through alder trunks and fresh willow whips, the pool surface is pale in the gathering dusk. The evening sky reflects like a mirror. Birdsong is rich and clear. Every small animal waiting for dusk has woken; thinking about a night of foraging ahead. A kingfisher flashes past. From the bog at Shanagarry comes the plaintive

Quiet early morning finds me where the sweetest waters flow. I am where I always wanted to be, in Crosshaven, a place much loved by my parents, Donal and Imelda. Back in the days when I was a boy we holidayed up in Fennell’s Bay and watched the great ships sail out to sea. We